It is for ‘such a time as this’ to be a part of this vision. The Lord wants us to help Muslims receive God’s Grace and Mercy available only through Jesus.

In their conversations many Muslims tell their Christian neighbors and friends that they believe in Jesus and love him more than Christians. So where does such an acceptance come from? The source for a Muslim is primarily the Qur’an and what Muhammad said about Jesus.  The Qur’an affirms Jesus’ supernatural birth. The miracle starts with Mary the Virgin being ‘dedicated to God’s service from the womb’.

Is the Bible unknown to the Qur'an?

When Christians use the testimony of the Qur’an in support of the Bible’s integrity, some Muslims argue that the references in the Qur’an do not relate to present day versions of the Torah and the Gospel. They say that the “Scriptures” of the Jews, as well as the “Scriptures” of the Christians at the time of Muhammad, 571-632 CE, were different than those available today.

Both Islam and Christianity believe that God sent His messengers to lead human beings into the right path. They do differ as to how to deal with the separation between God and man caused by the sin of men, which the Bible clearly states is evident in the whole of humankind, “There is no one righteous, not even one” (Romans 3:11), for, “all have sinned and fall short of the glory of God” (Romans 3:23). In general, sin means transgression of the law of God (1 John 3:4). This law exists because God is Holy and so cannot abide with evil. It is offensive to God no matter what the sinner’s excuse or how insignificant the sin.

The Qur’an also tells us that all are guilty and unworthy to be saved. If God were to judge us all according to his rules, none of us would be saved. “If Allah were to punish men for their wrong-doing, he would not leave, on the earth, a single living creature” (Sura 16:61, see also Sura 35:45).

Every year, millions of Muslims around the world make the religious journey known as Hajj to Mecca. As one of the five 'pillars' of Islam, Hajj is a requirement for Muslims to perform at least once in a life, if physically and financially able (Qur’an 2:196ff). Muslims consider their sins forgiven due to their paticipation. Some make the pilgrimage more than once. 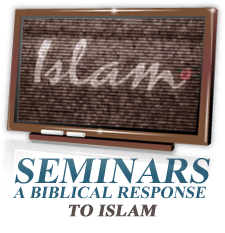