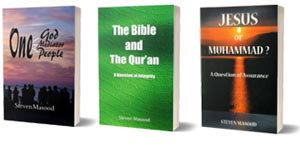 Check Out Our New & Popular Books

"One God, One Mediator, One People" is now available in paperback in our store and other popular books and items.

Is the Bible unknown to the Qur'an?

When Christians use the testimony of the Qur’an in support of the Bible’s integrity, some Muslims argue that the references in the Qur’an do not relate to present day versions of the Torah and the Gospel. They say that the “Scriptures” of the Jews, as well as the “Scriptures” of the Christians at the time of Muhammad, 571-632 CE, were different than those available today.

Both Islam and Christianity believe that God sent His messengers to lead human beings into the right path. They do differ as to how to deal with the separation between God and man caused by the sin of men, which the Bible clearly states is evident in the whole of humankind, “There is no one righteous, not even one” (Romans 3:11), for, “all have sinned and fall short of the glory of God” (Romans 3:23). In general, sin means transgression of the law of God (1 John 3:4). This law exists because God is Holy and so cannot abide with evil. It is offensive to God no matter what the sinner’s excuse or how insignificant the sin.

The Qur’an also tells us that all are guilty and unworthy to be saved. If God were to judge us all according to his rules, none of us would be saved. “If Allah were to punish men for their wrong-doing, he would not leave, on the earth, a single living creature” (Sura 16:61, see also Sura 35:45).

Does America need Islam? Salam Al Marayati, the executive director of the Muslim Public Affairs Council, DC published an article, "The Key to Defeating ISIS is Islam" on September 18 in the Huffington Post. (The link is posted at the end of my response). He claims, "America needs Islam -- not to convert people to the religion, but as the antidote to the toxic and threatening ideology of ISIS.” I disagree completely with his statement.

Personally, I have felt the negative side effects of Islam, which America most definitely does not need! I was born in Islam, did my best to be a good Muslim for 23 years and have studied it for 40 years. Salam Al Marayati’s article seems to be a deliberate attempt to show Islam as a peaceful ideology and ISIS as a group which Islam does not condone. Let’s look at his claims concerning ISIS and Islam and see the real picture. I have dealt with all his 8 points in the light of the Qur’an and what Muhammad taught.

Are high attendance rates and huge church buildings signs of true success in the body of Christ?

Is a church with a big building and high attendance a sign of success? According to Barna Group, a Christian polling organization, almost half of Christians in the USA (49%) say church attendance is "somewhat" or "very" important, but half (51%) say it is "not too" or "not at all" important. The younger we are, the worse the numbers get. Only two in 10 adults under the age of 30 believe church is important; more than a third take an anti-church stance.