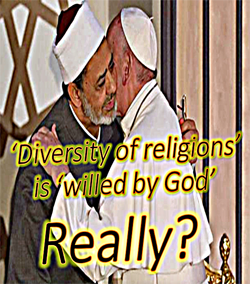 On Feb. 4, 2019, an interreligious meeting took place in Abu Dhabi, UAE. The Pope signed a covenant with Sheikh Ahmad Al-Tayyeb, head of Egypt’s al-Azhar University, declaring that ‘diversity of religions’ is ‘willed by God.’ The Muslim Sheikh is considered by some as the head of the Sunni Muslims which is a majority or 85% of Muslims.

To betray and take advantage of others, indeed many of the Muslims feel at home. Why and how? Well, the Qur’an speaks with both sides of its mouth. Yes, on one hand when Muhammad was not powerful enough, he would only use the peaceful Qur’anic passages claiming to have had been revealed to him by God, that whoever believed in God and the Day of Judgment were OK (Sura 2:62). He went to the extent to declare that God had given every group of people a law to live by and if he had willed, he would have made all one Ummah (Sura 5:48). Ummah means to make people all one community.

However, when Muhammad gained control and power, all such passages were declared as superseded by later commandments revealed to Muhammad by Allah. In those later passages he claimed that it’s up to Allah to replace or suspend any command (Sura 2:106). According to them now in Allah’s (their god’s) eyes only Islam is acceptable (Sura 3:19; 85). All must surrender or submit to Islam or otherwise be ready to be slaughtered. Even Jews and Christians must embrace and accept Muhammad as their prophet. However, they were given a choice that if they do not then they are declared as second-class citizens and must pay jizya, a tribute to the Muslim hierarchy (Sura 9:29). Thus today, the Qur’an has both types of passages mixed together throughout its content. Muslims use them to their advantage to confuse non-Muslims, knowing in full fledge that in three places the Qur’an has statements full of promises that God has intended for Islam to take over all religions or ideologies (Sura 9:33; 48:17-23; 61:9). Muslims run towards making treaties to put themselves on an even playing field, knowing that the Qur’an does not allow such a treaty to remain intact once Muslims are in power (Sura 47:35). Otherwise, Muslims follow the Qur’anic command which forbids them to have friendship with Christians or Jews (Sura 5:51).

We, as Christians, can understand the Islamic way of manipulation for we know Satan is a liar, deceiver and confuses. However, by the Pope’s signing of such a treaty declaring that it is God’s will to have diversity; he should be asked which Bible does he read? What about the Gospel? What about the Cross & Resurrection of Jesus Christ proving who He is, the God and Creator and Messiah of the world? If diversity is the case then how come Jesus so clearly states, ‘No one can come to the Father but only through me’ (John 14:6)? How did the apostles, in the face of all that persecution, stand strong stating, ‘No other name has been given under heaven through whom we can be saved’ (Acts 4:12; Hebrews 1:1-2; 2 Timothy 2:9-12)?

Is it both parties who are deceiving each other? The Pope is not aligning himself and his message with Jesus in the light of the Bible. Instead of exalting Jesus, he, like Judas, is betraying his innocent followers of Christ. The Scriptures warn that among us people will rise to such a level to not only disobey but will betray and deceive believers (Matthew 24:11, 24; Acts 20:30; 2 Peter 2:1-3). Satan is their guide and master, who according to the Scriptures prowls around to devour" (1 Peter 5:8).  Many times, he acts like an ‘angel of light’ (2 Cor 11:14).

Can’t Pope Francis see the truth? How could it be the same God who sent Jesus to die for people and then 600 years later tells Muhammad to inform people to kill others and be killed for him? The Qur’an says, ‘Allah loves those who kill for Him’ (Sura 61:4). The Spirit of Deception is all over the world. Satan does not want people to follow Jesus, through whom believers gain victory over ‘death’. Dear Friends, heed Paul’s warning: “Should we, or an angel from Heaven, preach any other gospel unto you than that which we have preached to you, let him be accursed” (Galatian 1:8). Pope Francis is preaching another gospel and it is not of Jesus. Be warned.

Be warned that Satan has come through this deceptive covenant as an ‘Angel of Light’ to deceive many that Islam is a peaceful religion, yet it is far from peaceful. Satan has even come as an ‘Angel of Light’ through Catholicism here to compromise the gospel and boil it down to getting along with our neighbor and coexisting superficially by indirectly making Christianity line up with Islam by agreeing both religions worship the same god. This is far from the truth!! Be warned my friend!

Too many Americans are ignorant to the violence of Islam because they choose to believe the devil, the liar who comes through Muslims claiming Islam means peace. Islam does not mean peace. It means submission!!! Islam teaches Muslims to lie for the greater cause of Islam. It’s called takiyya, or to omit the truth and it’s called kitman.  Muslims in America, especially the Islamic leadership, want you to believe that Islam is peaceful and are using only the peaceful verses in the Qur’an to lull you to sleep so you will not be awake and alert and wise as a serpent to see the full truth. When you are asleep it will be easy for Muslims to get into positions of authority in this country, as Americans are being ‘Politically correct’ and intimidated by Muslim threats to sue them for prejudices, so they can turn the US Constitution into Shari’a, which is Islamic law. This is called Stealth Jihad, the way Muslims take over a nation from within without the sword or fighting militarily.

Under Shari’a (Islamic law), women will be subjugated beneath man’s feet as property, sex objects and baby making machines while Muslim men rule the world with Shari’a, cutting off hands of thieves, throwing gays over cliffs, stoning women for false accusations of adultery in order to have a fifth ‘child bride’ of age 8. On and on it goes with going back to the LAW for Muslim men to punish people to extremes because they believe Allah gives them the authority to control people this way in order to make peace.

The meaning of ‘peace’ in the dictionary of a Muslim is when all people are Muslim and ruled by Shari’a so the whole world is Islamic. Islamic peace does not mean ‘no more war’ or ‘all people are living kindly and nicely coexisting with each other’ no matter what they believe. And most assuredly Islamic peace does not mean what every Christian knows it to mean; when a person has accepted Jesus Christ as Lord and Savior of their life, they will have peace because Jesus is the Prince of peace. Jesus is our GRACE from a just God because He knows we are incapable of keeping the LAW of God perfectly. Man will never have peace until he has made his life right with God, Almighty, the true Creator and Lord of this universe. This is the God that will send Jesus to take the true Christ followers called ‘The Bride’ out of this earth so He can destroy the earth and all the evil in order to bring the new heaven and earth where Jesus will rule and rein forever! Then there will be no more war, no more deception, no more pain, no more crying, and no more evil but pure PEACE forever eternally with God our Creator in His perfect LOVE. Sadly, all who do not believe Jesus is that Prince of Peace, our Savior and Lord of our lives will be burning in hell eternally as their eternal punishment for not freely choosing Jesus but instead choosing Satan and his deception.

If you believe this covenant between the Pope and the head Muslim Sheik is a ‘good thing’ and will bring peace among nations, you are deceived, exactly where Satan wants you, asleep believing there is peace and safety through this covenant, so that you will not believe in Jesus as your Lord and Savior and only way to God but you believe Satan is your god. Hell was made for Satan and his followers.

Remember the Word of God is the TRUTH and says in I Thessalonians 5:3:

While people are saying, “Peace and safety,” destruction will come on them suddenly, as labor pains on a pregnant woman, and they will not escape.

Read our other articles on similar subjects:

What's Going on Behind Church Doors?

More than a Mosque