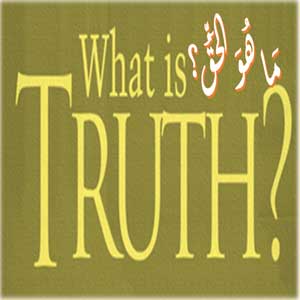 What if the things you stake your life on are not true? Or maybe there is no ultimate truth in this world—only shades of gray? We live in a time when many people in the world believe that no one can know what is true or false. If our senses cannot understand something, then it is questioned - indeed, even the existence of God is challenged in many secular circles. We do not have to go back into history. Just a century ago, in the name of modernism, self-indulgence became a preference factor. By the mid 20th century, the term post-modernism came into the academic circle. It was followed soon by a rejection of the phrase “the truth,” which was viewed as naïve and repressive. The academics permitted only “truths” – always plural, frequently personalized, and inevitably relativized.

This opened the world to doubt anything, even our existence. Today, it is popular in the second decade of the 21st century to make statements such as “everything is relative” and “there is no absolute truth.” Others claim we live in “the post-truth” era. The phrase itself traces back as far as 1992, but it was on November 16, 2016, that Oxford Dictionaries announced that “post-truth” had been selected as the word which, more than any other, reflected “the passing year in language.” The Oxford Dictionary defined “post-truth” as “relating to or denoting circumstances in which objective facts are less influential in shaping public opinion than appeals to emotion and personal belief.”[1]

Today, it is popular to make statements such as, “Everything is relative” or “It is wrong to think that a person can know the absolute truth.” One does not need academic degrees in logic to recognize the self-contradictory nature of such a claim. If there is no absolute truth, how can those who hold such a view make assertions about “everything” or insist that anything is “wrong” or even “right”? Many of my Muslim friends have embraced such a mindset in the spiritual area as they engage in conversation with people of other faiths.

For example, in response to a presentation I gave on my hope of assurance of eternal life in Christ, a Muslim responded using the idea of “everything is relative.” He said, “We cannot be certain about anything, including Biblical doctrines.” Then, he negated that idea by calling Islam the perfect religion, the only solution for every aspect of life, and the Qur’an and Muhammad as the final source to know the “Truth.” So, on the one hand, to discredit my point of view, he used the idea of “there is no absolute truth,” yet when it came to his presentation, he stood for what he called the “truth.”

Muslim’s holy book, the Qur’an − like the Torah, the Books of the prophets, and the Injil (the Gospels) − stands clearly for the belief in God, of His existence, and creator of the universe. This principle is foundational in all three faiths (Judaism, Christianity, and Islam). They also share the belief that God sent His prophets to lead people into the straight path and that one day we will all stand before Him and give account for all our doings. The Bible and the Qur’an agree that not only is there a Creator of the universe but also that He has revealed His “Truth.”  But what exactly is this “Truth” that God has revealed? It is here that the Bible differs from the Qur’an: when it comes to this question of what ultimate Truth is.

One often hears people ask sarcastically, “What is truth?” This poignant question was asked even by the Roman ruler, Pilate, when Jesus, the Messiah, told him about His position as king and His kingdom: “The reason I was born and came into the world is to testify to the truth. Everyone on the side of truth listens to me.” (John 18:37) Jesus did not share today’s popular opinion. In fact, to those who seek God, He says, “You shall know the truth, and the truth shall make you free.” (John 8:32)

In the Qur’anic Arabic, Haqq is the word for truth. In Islamic contexts, it is also interpreted as right and reality. Al-Haqq, “the truth”, is one of the names of God in the Qur’an. It is often used to refer to God as the Ultimate Reality in Islam. The word “truth” occurs many times in the Bible. While in the Qur’an, Muhammad is never addressed with this attribute, in the Bible, we find that Jesus claimed this attribute “Truth” along with others as being the Light, the First, the Last, the Judge, and the Forgiver. In the Qur’an, these attributes are only reserved for God. When I started reading the Bible, it was quite challenging to see that Jesus, whom, as a Muslim, I saw as a prophet, the word, and the Spirit from God is the ultimate reality in existence with God. He lowered Himself came to this earth as the second Adam to redeem people back to the paradise of God.

Muslims believe in all the messengers of God born among the Israelites. However, in their messages, is the addition that after there was Jesus, God raised another prophet, Muhammad, and finalized his message for the world through him. So, here was another challenge to face finding that it is Jesus through whom God completed His message and work of restoration.

Would you like to find out more? How I got help and came to the understanding of belief in One God, One Mediator, and believers as One People. Please write to me, and I will be happy to send you my new book, ‘One God, One Mediator, One people’ (254 pages) on just one condition: please read it and pass it on to a Muslim or a Christian friend. [email protected]